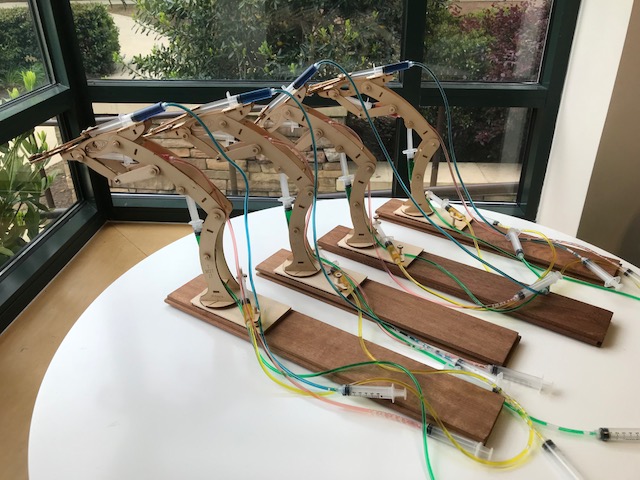 The 3rd graders have been using T-Bot II robot arms to study simple machines, hydraulics, and Cartesian coordinates. The students learned that there are 6 simple machines that are used to make work easier. We discussed the types and how they are used. They were surprised to discover that simple machines are used everywhere. They could see that the T-Bot is a complex machine made up of some simple machines. The T-Bot II is controlled by syringes full of water. The water is transferred from one syringe to the other through plastic tubing causing that part of the robot arm to move. The water is colored to help identify what part each syringe controls. The students learned that this process is called hydraulics and it is used in construction machines, elevators, office chairs, car brakes, etc. After they mastered the use of the T-Bot II, we moved on to a study of the Cartesian coordinate system. Negative numbers were new to them, but it didn’t take long for them to learn how to find a point on the grid. They rolled dice to determine a coordinate and then moved a gram cube to that location using the robot arm. We worked on lowering the number of steps that it took to get there. This was done to demonstrate what programmers experience when writing programs. They must use specific details in an efficient way. We also talked about the use of the Cartesian coordinate system in latitude and longitude that is crucial to satellites and the military. At the end of our study, I gave them some time to think of a creative use of the robot. I had one team pick up a marker and draw with it. Another group used it to push a ball into a stack of small cups, calling it “Robot Bowling”. Throughout this activity, we discussed the real world application of all these concepts and the jobs filled by robots today. Think about where we would be if we didn’t have robots to build cars, take us to space, explore the underwater world, help with surgery, aid our military, and defuse a bomb!