Written by Specials on September 10, 2018. Posted in General 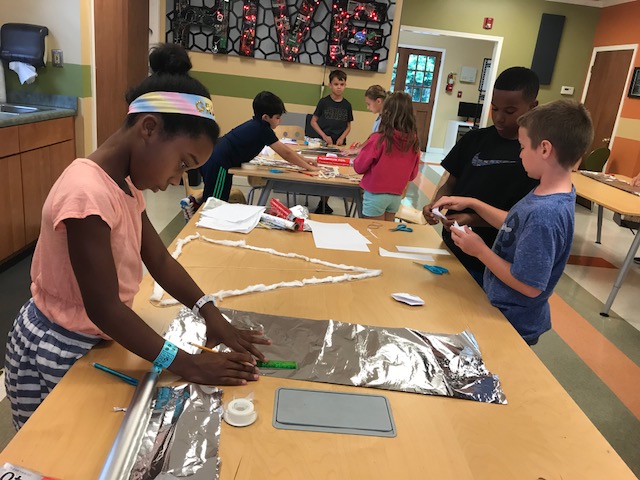 Have you ever thought about how folding is used in the world? There are natural occuring folding and man-made folding. The fourth graders were introduced to natural and man-made folded objects.The man made devices were inspired by Japanese origami. The folding was studied and then mathematical processes were applied. Here are the examples of folding that we discussed:

Butterfly wings inside a Chrysalis – If they are not folded, a wing could be damaged while emerging. This is nature’s way of preventing this problem.
Proteins within your body- They are responsible for functions within the body. They are naturally folded to determine specific jobs. Scientists can manipulate the folds for medical reasons. Man made protein folding has created many flu vaccines.
Heart Stents – A small folded metal cage is inserted into a blocked artery and then expanded to hold the artery open. This allows blood to flow through.
Parachutes – If these are not folded correctly, you would jump out of a plane and then have a very rough landing. These will only deploy when they are folded properly. When a parachute is used, it is inspected and then folded very carefully for the next use.
Car airbags – The folding of these may mean life or death in an accident. They must deploy the correct way. Only proper folding will work. They are very small when folded, because there is little room where they are located.
Satellites- They must be folded to fit inside of a cylinder rocket and then unfold later.
James Webb Space Telescope – Will launch in 2021 – Must be folded to fit in a rocket. It will unfold once it is in space. It is made of many materials that fold in different ways. It is amazing to watch. James Webb Telescope simulation

After studying these examples I challenged the students to make a solar panel with specific dimensions that could be folded to fit into a foil box. The “skeleton” of the panel was made out of materials of their choice. The skeleton was covered by aluminum foil. They had to fold it to fit without tearing the aluminum. Most everyone created a rectangle version, but I had a couple attempt a triangle shape. Ask your child about this and see if they were or weren’t successful and why.