Written by Specials on September 17, 2018. Posted in General 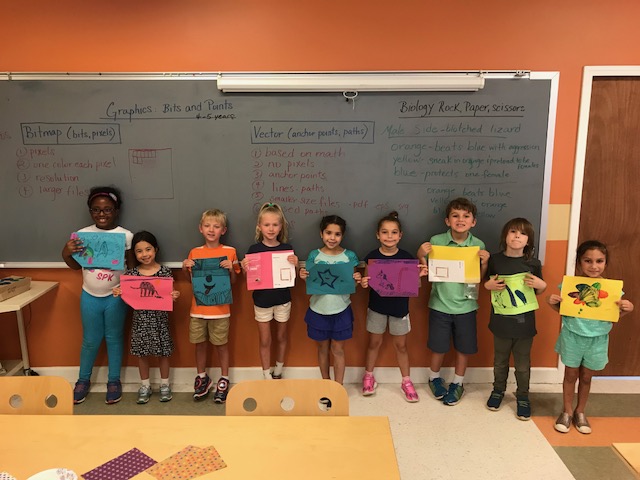 The first grade students learned how a simple circuit works and the parts needed to make a bulb light up. They each had a small LED bulb, a coin battery, copper tape, a resistor, and a clip. We had a diagram to follow so we glued it to the back to keep the circuit hidden from the front. We determined where the bulb would come through the paper to the other side. Then the students drew a picture on the front that incorporated that light. Once they had finished, we turned the paper over and assembled the circuit.

They knew that the circuit had to be closed for the light to work. If there was any place where metal was missing or wires were disconnected, it would not work. We placed the copper tape, resistor, and LED to make a solid path from the negative side of the battery to the positive side of the battery. It was important that they knew which way the LED was placed. If the wires were switched, the LED did not work. The battery was placed in the space provided and then the paper was folded over to make the copper tape touch the other side of the battery. They had to be careful here, because the battery needed to be turned the right way. The clip was used to hold the battery in place while they wanted it turned on. This was so much fun for them and it proved to be a good learning experience. If you ask them what a circuit is, I hope they will be able to tell you.

During this activity, the students learned that when anything is created by an engineer there will be times when things do not work properly. Because there were some that didn’t light up, they realized that something was wrong. We had to find the problem and then fix it. This is the “improve” step in the Engineering Design Process.