Written by Specials on November 26, 2018. Posted in General 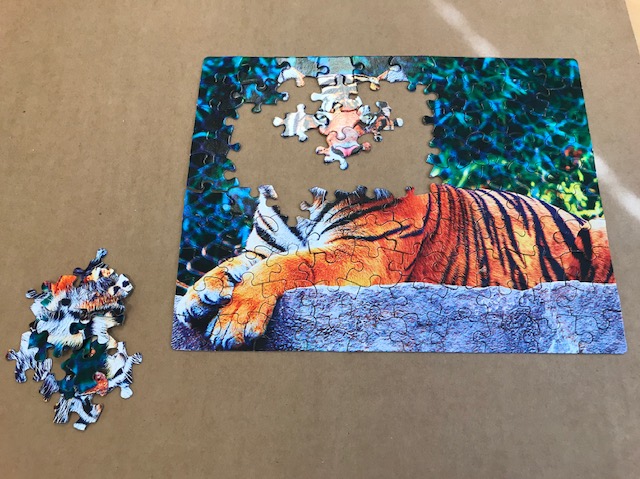 Many people believe that puzzles are just a toy or an activity to do when you are bored. They really should think again. In STEM, the 4th and 5th graders were challenged to build a 100 piece puzzle faster than everyone else in the room. The construction of the puzzle required the use of the Engineering Design Process. They did not have a photo of the finished puzzle, so there was nothing to look at for clues. They came up with a plan on how to begin and progress through the completion. In addition to the building of the puzzle, they had to barter from other groups. Ten of their puzzle pieces were spread among the other players’ puzzle pieces. Deals had to be made to get puzzle pieces back. The procedures included putting together edges first, working on separate areas, working on the same area, turning over all the pieces before beginning, just grabbing pieces at random, and roaming around the room looking for pieces instead of working on the puzzle for a while. Some of these were productive, but some really slowed them down. Based on the results, we did discover that 4 of the puzzles were easier due to colors. Those that won did a number of things that sped them up. After doing this activity, the students really understood how important a plan is when an engineering job has to be done.