Written by Specials on September 11, 2019. Posted in General 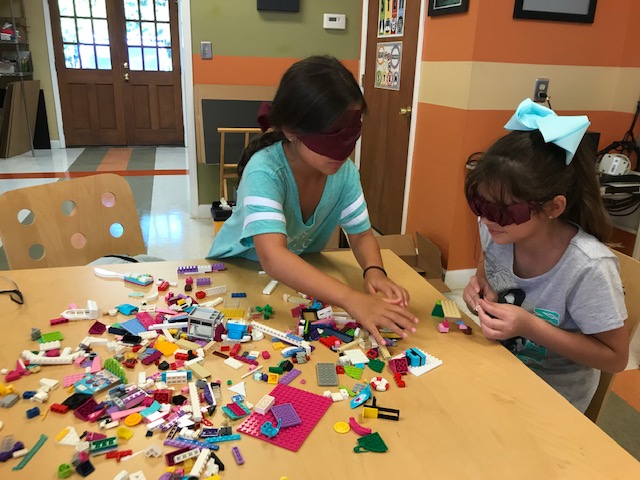 Last week the 4th graders were put to the task of creating an animal out of Legos. That seemed easy until I told them that they would be blind while doing so. This challenge tested their spatial abilities, tactile learning and imagination.The first 4th grade class began with blindfolds and they were having trouble with them, so for the next class, I put bags over their heads and that was perfect. I told them that I was going to use the bags and most of them were shocked that I would do that. I quickly replied that they would be paper, not plastic. Very safety conscious kids! Once they were blind, I piled a bunch of Lego parts in the middle of the tables. They had to feel them and put them together. They found this very hard to do. I loved watching them try to find just the right piece they needed. Some of them had the perfect piece that they wanted and then somehow lost it. When they were done, the big reveal was called. The excitement of the creations was great. After that I gave them another challenge to complete. They were told to create a shelter for the animal they had built.They worked with a partner on this.This added a level of difficulty, because then they had to work together with different ideas and no way to see what they were working with. This was a fantastic way to start off STEM for the year. We all had a great time with this challenge. The photos are funny! Enjoy.