Written by JulieRozier on October 19, 2019. Posted in Julie Rozier 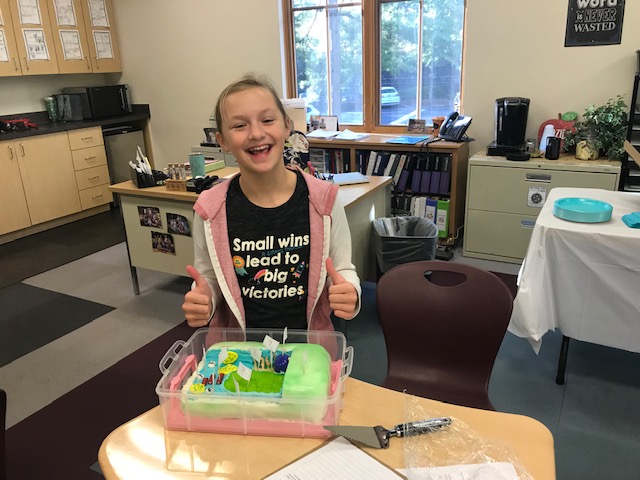 Photo Highlight of the Week: The cell models were a great success!!! Students had fun sharing their creations, especially the sweet treats!

ELA: We are so excited to begin our new novel studies this week, Shades of Gray and Turn Homeward, Hannalee! Shades of Gray is a historical novel that tells the story of a twelve-year-old boy, Will Page, who faces the challenge of rebuilding his life after losing his entire immediate family in the American Civil War. As students study the American Civil War in History, this novel will help students understand the challenges our country faced during the Reconstruction era. In contrast to Shades of Gray, students will also read Turn, Homeward Hannalee as an outside reading assignment. Turn, Homeward Hannalee tells the story of a twelve-year-old girl who tries to find her way back home after she is taken to Indiana by Union soldiers during the final days of the Civil War because she is a Roswell Mill worker. This is an exciting story that will bring local history to life for our children!

Math: The division unit test will be on Monday. I emailed parents a Jeopardy review game students can play as they study! Then, we will move into our Number Theory and Fractions Unit. Within this unit, students will learn how to find the prime factorization of a composite number using a factor tree, find the greatest common factor and least common multiple between a set of numbers, write fractions in greatest and lowest terms, and learn how to name mixed numbers and improper fractions.

Science: We are beginning our Work and Simple Machines Cell. During this Cell, students will perform several investigations focused on work and simple machines. By completing multiple trials and investigating the effect of different variables, students will begin to draw conclusions concerning the relationship between work, force, and distance. Students will use the formula Work = Force x distance to calculate work and to define and explore the relationship between its components: the force applied to a load and the distance over which the force is applied.
Through investigations centered on simple machines such as the pulley, the lever, and the inclined plane, students will discover the advantages of using simple machines. Students will find that the single fixed pulley offers an advantage by reversing the direction of the applied force. The lever and the inclined plane, however, offer a different type of advantage by altering the force and distance. As the applied force decreases, the distance over which that force is applied must increase. Likewise, the inverse is also true. As the distance over which the force is applied decreases, the applied force must increase.

History: We will start our next unit this week; the Civil War. Our first two lessons will cover slavery and its history within the United States, especially leading up to the Civil War. We’ll look at the importance of the cotton gin, what daily life was like for slaves, and we’ll learn about some early slave rebellions, including Nat Turner. We’ll then look at the leading abolitionists at the time: Frederick Douglass, William Lloyd Garrison, Harriet Tubman, and Harriet Beecher Stowe.

Other: Your child will receive his or her report card on Tuesday. Please sign and return the following day. With Halloween around the corner, we have several fun activities in store! On October 29th, we will make glow-in-the-dark slime with our book buddies! On October 31st, students will receive a special Halloween treat and are welcome to dress up as a book character! Please remember that all costumes should be school appropriate! Nothing that will scare our young children on campus. Also, nothing too distracting from our academic day. I also have a fun Jack-O-Lantern math lesson, where one lucky student will come home with a pumpkin and carving kit!