Written by Specials on December 4, 2019. Posted in General 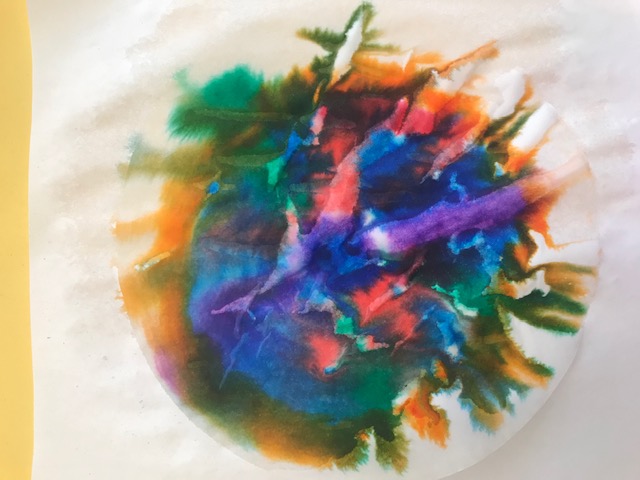 The kindergarten students were introduced to the physics of diffusion. I don’t think they actually got their heads around the word physics, but they definitely learned a concept from our activity. Diffusion is defined as the movement of a substance from an area of high concentration to an area of low concentration. To test this and see it in action, we used a coffee filter, markers, and water. The students colored all over the coffee filter that was placed on top of a plain piece of white paper. I told them to leave some white areas around the coffee filter. We needed this for the color to move. This was a little strange for them because their teachers want them to leave no white areas when coloring! I told them that we were doing an experiment instead of coloring for only art. This is where the A joins STEM to make STEAM. After they were happy with their creations, we placed them on the white paper and sprayed water all over the top. The colors began to spread in large patches and areas that looked like veins traveling through the canvas. It was amazing to see how each one looked so different. They were amazed and more importantly, they understood what they saw. After they were dry, we looked at the inkblots left on the white paper. Each of them looked at the shape and attempted to find images in the color on the paper. They did a great job with this activity and I think they were very proud of the result.